Excessive wealth should be fought instead of poverty 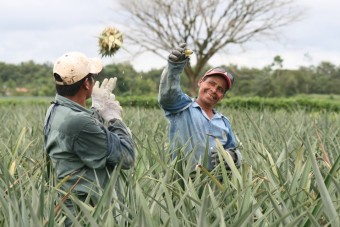 In 2015 the UN adopted new Sustainable Development Agenda. The first of these goals provides for “End poverty in all its forms everywhere”. Elimination of poverty has been discussed since long ago and a lot has been done in order to help the poorest people in the world to survive.

Donations are being collected, aid packages are being delivered. Wealthier consumers can buy fair trade goods in order to support poor farmers in the global south. Most of these actions are based on the view that by promoting the economic growth we will help to raise income and thus “would lift” people out of poverty.

During last 30 years the global economy has almost doubled in volume reaching the level of 78 trillion dollars in 2014. However, this growth of income has not been proportional. These have been wealthier people on the planet who have experienced the highest growth. The recent research by Oxfam reveals that 62 richest persons in the world own the same amount of resources as 3.5 billion poorest persons. The gap between rich and poor has been only increasing during recent years. 5 years ago 388 rich persons were needed to reach the same balance.

This is why lately the necessity of eliminating extreme wealth has been discussed increasingly often in order to avoid a situation when the biggest portion of material wealth is concentrated in the hands of few. Even business circles have joined this discussion. Knife, the Swedish giant in electrical goods production, published comics about extremely rich people who lead miserable lives and, like squirrels are picking nuts, they are spending their funds for expensive and unneeded items.

Poverty is not a virus sneaking in the society. In most cases it is created by people themselves. Of course, there are people who choose to live in poverty like Diogenes in a barrel. However, mostly this is a coincidence of circumstances or systemic draining of resources from communities who are poor and who cannot sufficiently defend their interests.

Oxfam refers to several trends that have contributed to the growth of inequality of income, deregulation, privatisation and the increasing role of banks in the economy seen also in Latvia being among them. The banking system and so referred financial innovations have served as an essential aid in accumulation and hiding of resources. One in five billioners comes from the banking/ finance sector. Moreover, unfair trade agreements, taking away land from poor people and structural debts can be listed among the causes behind poverty. Unfortunately, the UN Sustainable Development Agenda does not actually refer to the above causes behind poverty. It will be very difficult to reach the goals set by the UN by fighting only consequences.

The Oxfam research was published before the meeting of the global policy and economy leaders at the World Economic Forum in Davos, Switzerland. It is significant that tax heavens, like Switzerland, are among the tools that help rich people to become more rich and to hide assets worth trillions of dollars from the taxation authorities in their countries. Oxfam also emphasises that 9 of 10 Forum participants own assets in tax heavens.

Unfortunately, it has been the current economic system that has contributed to this distribution of income which is unprecedented in the global history of mankind. The distribution of income was more fair even in Rome and other historical empires. Thomas Piketty, the famous French economist, refers to the income concentration mechanism incorporated in the capitalism and states that income from the economic growth mainly end up at the capital holders in his book “Capitalism in the 21st century”.

The research conducted by the consultation firm Motivacation international indicates that wealthier people tend to trust the legal system, governments and multinational companies more because they act in favour of their interests. Therefore this is no surprise that the global trust in democracy and state administration is low because this system is not able to defend the interests of people and cannot level out income. However, the research by Motivacation international also reveals the difference in opinions of the richest persons in the world. Many wealthy people are socially orientated and would willingly contribute to more fair distribution of income within the society being aware that this would benefit the society as a whole including themselves.

In order to secure this, Oxfam proposes to ensure that people receive at least the minimum subsistence income and to reduce the difference of income in each company (the difference between the highest and the lowest wage should not exceed 10 times), to strengthen the rights of women, to restrict and control the impact of the economic elite upon the adoption of resolutions, to change the medicine research and financing system to make health care accessible to everybody, to introduce differentiated income taxes and to ensure accessible and high quality education also for poor people, as well as to fight tax evasion and tax heavens (municipalities with very low/ non-transparent taxes). Unfortunately, a lot needs to be done for implementing all the needed changes.

Although the situation definitely needs radical improvements, also now there are initiatives targeting more equal distribution of resources. Fair trade goods are gradually becoming cheaper and in some cases there are no longer considerable differences between fair trade and conventional goods from the point of view of price. Thus, it is not only rich people who can afford buying these products. For example, increasingly more often the price of Fairtrade certified banana is the same as the price of conventional banana. This can be explained by tax reliefs enjoyed by fair trade products in the European Union. In future the European Union should pay particular attention to its import policy and exercise stricter monitoring in order to ensure that the fair trade principles are followed in production of goods brought to the EU.