Fair Trade over the world

The FAIRTRADE Mark is a registered trademark of Fairtrade International (FLO). This mark is on most of Fair Trade products offered in the Baltic countries. Fairtrade labelled products are sold in over 120 countries. Most of Fairtrade producers are located in Africa, Latin America and the Caribbean, Asia and Oceania. 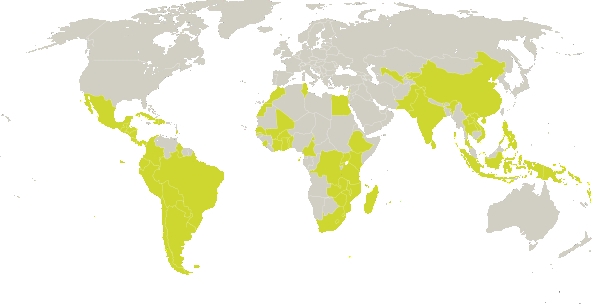 Fairtrade producers over the world
Fair Trade organizations
Fairtrade International (FLO) is a worldwide association of 25 organizations that coordinates Fairtrade labelling at an international level. Fairtrade International sets international standards in accordance with the ISEAL Code of Good Practice on Standard Setting. One set of standards applies to smallholders that are working together in co-operatives or other organizations with a democratic structure. The other set applies to workers, whose employers pay decent wages, guarantee the right to join trade unions, ensure health and safety standards and provide adequate housing where relevant. Fairtrade Standards also cover terms of trade. Most products have a Fairtrade Minimum Price, which is the minimum that must be paid to the producers. In addition producers get an additional sum, the Fairtrade Premium, to invest in their communities. Moreover, additional standards apply even to specific products such as coffee, tea, fresh fruit, cut flowers, seed cotton, sports ball or timber. There are now thousands of products in more than 120 countries that carry the FAIRTRADE Mark.
The World Fair Trade Organization (WFTO) is a global network of Fair Trade Organizations and representative body of 383 members committed to 100% Fair Trade. WFTO is the main monitoring body of the integrated supply chains route and their members represent the Fair Trade chain from production to sale. All WFTO members are required to pass through the monitoring system, which is based on a Self-Assessment Reports (SAR). The SAR is an internal audit tool when members report on their adherence to the 10 Principles and provide the evidence to support their statement. The WFTO operates in 75 countries across 5 regions. The network carries out its mission through campaigning, policy, advocacy, marketing, monitoring, certification and market access. It has elected global and regional boards voted from the membership by the membership.
EFTA (European Fair Trade Association) is an association of ten Fair Trade importers in nine European countries (Austria, Belgium, France, Germany, Italy, The Netherlands, Spain, Switzerland and the United Kingdom). EFTA was established informally in 1987 by some of the oldest and largest Fair Trade importers. It gained formal status in 1990. EFTA is based in the Netherlands and has Dutch Articles of Association. The aim of EFTA is to support its member organizations in their work and to encourage them to cooperate and coordinate. It facilitates the exchange of information and networking; it creates conditions for labour division; it identifies areas of coordination and cooperation such as joint projects, research and systems to facilitate fair trading with suppliers.